The knee joint is the largest joint in the human body consisting of two articulations: one between the femur and tibia, and one between the femur and patella. It is commonly described as a ‘hinge joint’, being a combination of a hinge and pivot-joint, which permits flexion and extension as well as a slight internal and external rotation.
The knee joint consists of an articulation between four bones: the femur, tibia, fibula and patella, and comprises of four compartments. These are the medial and lateral tibiofemoral compartments, the patellofemoral compartment and the superior tibiofibular joint. The components of each of these compartments can suffer from repetitive strain, injury or disease.
There are many reasons for experiencing knee pain such as, sprained ligaments, meniscus (cartilage) tears, tendonitis, and excessive supination and excessive pronation. The knee is a complex joint, and it can experience pain due to an exaggerated Q angle of the upper leg, for example.
Some of the conditions that can affect the anterior knee compartment are conditions such as :
· Patellofemoral pain syndrome
· Chondromalacia Patella
· Osgood-Schlatter’s disease
· Sinding Larsen Johansson syndrome
· Knee bursitis/Hoffa’s disease
Generally in this article we will be dealing with non-trauma induced pain or biomechanically induced pain which is often described as idiopathic in nature.
Often when the subject is discussed terms such as ‘Retro Patella pain’, ‘Patella Femoral Dysfunction’, ‘Medial Compartment Syndrome’, ‘Chondromalacia Patella’ or ‘Iliotibial Band Friction Syndrome’ – these conditions are descriptions of knee pain (or pain centres) and do not indicate causative factor/s contributing to the experience of the pain.
Generally pain can be experienced Medial, Lateral or Anterior aspects and it is recommended that the Symptomatic treatment approach is adopted which, treats the pain and then progressively treats the underlying causative factors.

Understanding the dynamics of the knee joint is important in understanding why certain foot mechanic issues can impact upon the knee compartment. The knee is one of the most important joints in our body, playing an essential role in movement related to carrying the body weight horizontally (in running and walking) and in a vertical direction (jumping and absorbing ground reaction impact). The ligaments surrounding the knee joint offer stability by limiting medial and lateral movements, and together with several menisci and bursae, protect the articular capsule.
There is an allowance in the knee joint for a small amount of medial and lateral movement of between 3°-5°. Movement in excess of this puts the patient at risk of experiencing medial collateral ligament and lateral collateral ligament damage.
Both excess pronation and excess supination can have a deleterious effect on the medial and lateral collateral ligaments as outlined by Michaud 1 in which he states that for every 1˚ of pronation and or supination, the tibia internally or externally rotates 1˚, which in turn impacts on the knee joint, as it bears the stress generated by the tibial rotation.
When both excessive internal and excessive external rotation are experienced together excessive movement of the patella ligament occurs and pain can be experienced anteriorly

Tiberio(2) notes that malalignment factors such as, excessive rotation of the lower leg which accompanies subtalar joint pronation has been cited as a major contributor to patellofemoral dysfunction.
There appears to be a direct link to knee pain from foot mechanics issues and therefore identifying and treating basic lower limb biomechanics appears to have a beneficial affect for patients.
Controlling both pronation and addressing any issues with forefoot will be a determining factor in addressing anterior knee pain.
The medial collateral ligament (MCL) connects the femur to the tibia, whilst the lateral collateral ligament (LCL) connects the femur to the fibula and both work to stabilise the knee by bracing and protecting the sideways movement

The lateral collateral ligament is placed under stress by lateral biomechanical factors such as supination, internal lateral rotation of the tibial shaft and the impact of an untreated forefoot valgus deformity.
Patients that present with a high forefoot valgus FFTVL in excess of 10° will supinate their foot from heel strike to toe off which will stress the lateral knee compartment.
Excessive pronation will cause internal tibial rotation producing stress on the medial collateral ligament

Idiopathic anterior knee pain however, is often results from a combination of both pronation and supination in which the anterior patella attachment is aggravated by the Lateral to medial movement in the gait cycle.
A Forefoot Valgus less that 10° will allow the patient to heel strike lateral, the ground ‘reaction forces’ are sufficient to propel the foot into pronation at mid stance to toe off due to the lower Forefoot valgus deformity.
The movement at mid stance, in this situation, is rapid and as the supination to pronation movement occurs the patella tendon moves lateral to medial placing additional stress on the tendon.

Stabilising the foundation and reducing excessive movement around the sub talar joint ( STJ) is essential, a reduction in tibial rotation will have beneficial effects on collateral stress at the knee compartment.
A key point in the orthotic therapy to treat knee pain is that the orthotic is correctly fitted and aligned to the bisection of the calcaneus and the alignment of the tibia or tibial varum angle. Failure to adequately address this issue will result in the patient continuing to exhibit the same foundational instability or allow the patient to, in the case of pronation, to ‘collapse the arch onto the orthotic’ due to the poor rearfoot correction. 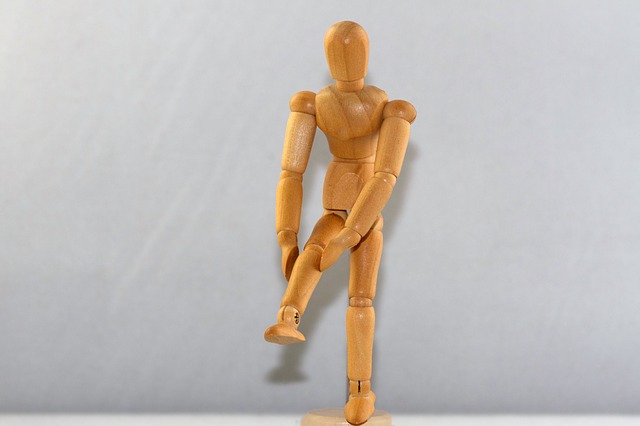